The Fixed Odds Betting Terminals All Party Parliamentary Group will be holding an Annual General Meeting on Tuesday 19th June from 11:30pm to 12:30pm in Committee room R of Portcullis House.

The group will consider the next steps of the campaign for a £2 stake on Fixed Odds Betting Terminals to ensure the Government implements this change as soon as possible.

Whilst the meeting will start in private, guests are welcome to attend the public section of this AGM.

Please RSVP with the APPG’s Secretariat [email protected] to confirm your attendance.

Carolyn Harris MP and Ian Duncan Smith MP have written on behalf of the Fixed Odds Betting Terminals APPG to Matt Hancock, Secretary of State for Digital, Culture, Media and Sport to raise a number of points that emerged from a meeting between the APPG and Gambling Commission.

In particular the FOBT APPG wishes to highlight that the Gambling Commission have confirmed that their advice to the department recommended that the stake on Fixed Odds Betting Terminals be reduced to £30 or less and that they in no way oppose a £2 stake on FOBTs, despite misleading claims in the media.

Minutes from Extraordinary Meeting of the FOBT APPG

Please click here to download a copy of the minutes from the extraordinary FOBT APPG meeting on the 19th March 2018.

If you have any questions or require any further information, please contact the Group Secretariat.

New Fixed Odds Betting Terminals loss calculator launched by the FOBT APPG shows the extent of losses on FOBTs with £57 lost every second and £3,424 lost every minute by gamblers.

The Fixed Odds Betting Terminals All Party Parliamentary Group has today launched a loss calculator on its website http://www.fobt-appg.com/

This calculator shows the money that gamblers are losing each day on FOBT machines and the total amount lost on FOBT machines since the end of the Government’s consultation on gaming machines which closed on 23 January 2018. Every day that the Government delay making a decision on FOBTs the losses mount up by £5m. This money is also often lost by those who can least afford it.

The total amount of money being lost by gamblers on FOBTs is:

This money which is being lost by gamblers and paid to betting companies could pay for the following each year:

Carolyn Harris MP, the Chair of the FOBT APPG said:

“The FOBT loss calculator shows the amount of money being lost by gamblers every second of every day, often by those who can least afford it. Every day that the Government delays making a decision on the FOBT stake, the amount of money lost grows by £5m. This is unacceptable.”

“The Government must not delay any longer. The stake on FOBTs must be reduced immediately to £2 to prevent further harm to the most vulnerable in our society”

Ronnie Cowan, the Vice Chair of the FOBT APPG said:

“I very much welcome this calculator which shows the magnitude of the losses that are happening as a result of FOBTs. As the Secretary of State himself has said, FOBTs are a ‘social blight’ on all our communities and the Government must reduce the stake to £2 with immediate effect.”

Betting firm William Hill has been hit with a £6.2m penalty package for breaching anti-money-laundering and social responsibility regulations. The penalty is the second biggest imposed by the Gambling Commission.

“I was deeply concerned to hear to hear that the betting firm William Hill has been fined £6.2m for breaching anti-money-laundering and social responsibility regulations.

These are very serious breeches which the Gambling Commission indicate demonstrate systemic problems at the company.

William Hill, along with the wider gambling industry must take their responsibilities in terms of dealing with money laundering and problem gambling seriously.

The Government can also act decisively to minimise risks through reducing the stake on FOBTs to £2 with immediate effect.”

On Tuesday 16th January the Fixed Odds Betting Terminal APPG held a drop in session with MPs, Peers and organisations supportive of the campaign for a maximum £2 stake on B2 FOBT machines. 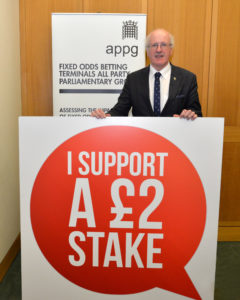 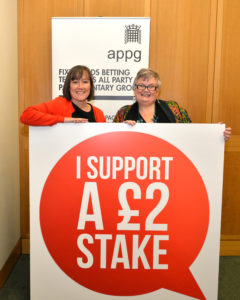 Letter to the Prime Minister

Along with other senior figures and organisations, members of the APPG have written to the Prime Minister urging her to take action on FOBTs

The full letter is available here

Minutes from last meeting of the FOBT APPG

Please click here to download a copy of the minutes from the FOBT APPG meeting on the 10th January 2018.

If you have any questions or require any further information, please contact the Group Secretariat.

In response to stories in the media that the maximum stake on Fixed Odds Betting Terminals (FOBTs) is set to be cut to £2, Carolyn Harris MP has commented:

“I very much welcome reports in the press today that the Government looks set to finally see sense and reduce the stake on Fixed Odds Betting Terminals to £2.

This is something that I have personally championed, along with others in Parliament, for over two and a half years.

The Government has for far too long ignored the many harms being caused by these machines.

With over 25 of my colleagues in Parliament, faith groups, local government and community groups, I have written to the Prime Minister demanding action. We say that the Government must not waver in helping the vulnerable. It must not row back on its commitment to take action on FOBTs. It must not bend to the power of the bookmaker lobby. The health and wellbeing of our country is at issue. The Government must reduce the stake on FOBTs to £2 and do so immediately.”

1. Carolyn Harris MP is the Member of Parliament for Swansea East. She is the Chair of the All Party Group on Fixed Odds Betting Terminals, a Group she founded in 2016.
2. The FOBT APPG has undertaken two inquiries into FOBTs and written to the Prime Minster imploring her to act on these machines.
3. For further inquiries please contact the secretariat of the Group [email protected] 07973 884797